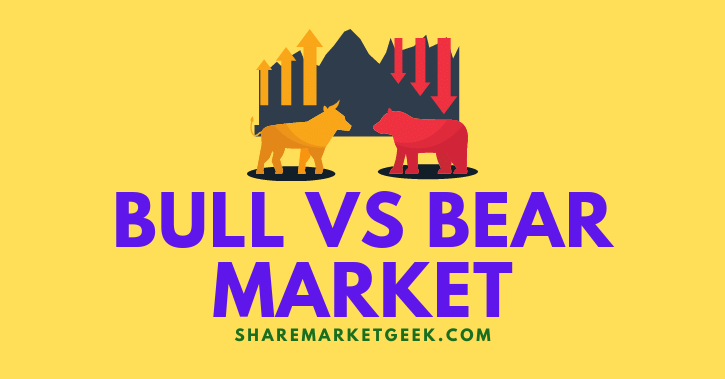 In this Article, we’ll try to explain two of the most basic terms of the Share Market i.e. Bull Market and Bear Market.

What is Bull Market?

The General definition of a Bull Market is a long-term phase in which prices typically increase for months or years. The word is most widely used in a share market context, although certain asset groups may also have bull markets, such as real estate, commodities, or foreign currencies.

Now there exist several different definitions of a bull market depending on who you ask. One of the most commonly accepted definition of a bull market is a situation in which share prices rise by 20%, usually after a drop of 20% and before a second 20% decline.

Bull markets tend to happen during periods when the Economy is strong or is strengthening. Often, core economic metrics like GDP growth and company profits will be strong, while other metrics like unemployment will trend lower.

One of the best indicators is consumer and investor confidence. The overall demand for shares is strong during a bull market, and the general “tone” of market analysis appears to be optimistic.

What is Bear Market?

These are generally periods where companies are cutting back, possibly closing locations or laying off workers. As these start to fall, unemployment can rise, growth can slow (or even turn negative). Investor and consumer confidence can begin to fade.

As a result, Investors may sell off investments to avoid losing money. As this behavior becomes more widespread, stock prices can plummet.

Now you might be wondering, what do Bears and Bulls have to do with stock prices?

Where do “Bull” and “Bear” come from?

The term “Bear Market” is named for the manner in which a bear tends to attack. The Bear tends to swipes down while attacking. So the Investors start selling more in fear of losses. And, Prices Go Down.

The term “Bull Market” is derived from the way a bull attacks its prey. The Bull Swipes Up while Attacking with its horns. Investors start buying more and more to get more Profits. And, Prices Go Up.

Unfortunately for investors, bull market periods that last too long can give way to bear markets. And that makes sense, good times generally aren’t sustainable indefinitely. Some bull markets end because of large economic issues, some due to irrational govt. decisions, and some due to other factors, but the point is that All Bull markets do end at some point.

Likewise, All Bear markets do end at some point. Investors will eventually be enticed by low stock prices and begin reinvesting in the market at some point during a bear market. As trading activity increases and investor confidence begins to grow, a bear market can eventually transition to a bull market. You might realize that Bull and Bear markets are somewhat part of a natural economic flow.

If you take a long historical look, you’ll realize that these market trends i.e. Bull and Bear markets are an unavoidable part of how the stock market operates.

If you have the right mindset, it won’t be concerning to you as an investor. As Both Bull Market and Bear Market come with their own set of opportunities for investors.

Don’t forget to Check our Other Blog Posts

Start Investing in the Stock Market by Opening your Trading Account with India’s Top Broker!